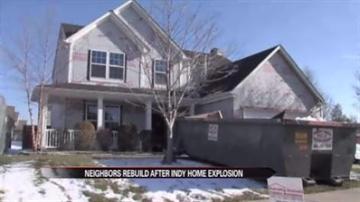 INDIANAPOLIS -- It's a bittersweet Christmas for neighbors in the Indianapolis subdivision rocked by a deadly home explosion last month.

Now victims are moving forward and rebuilding their homes. Mark and Michelle Karnes lived just down the street from the home at the center of the explosion.

Their home needed quite a bit of work, including new drywall and a new heating system. The couple said they're devastated by the explosion, but feel lucky to have survived and to have more than many of their neighbors do right now.

"It's just not going to be the same even though we'll be back in our house," said Michelle Karnes. "I already told Mark, I feel like I’m going to have anxiety issues the first week or two back in the house just because you know I haven't slept there. "

The couple plans to move back in next month. They also hope to get their street name changed to honor their neighbors killed in the blast.

Three people have been charged in connection with their deaths.