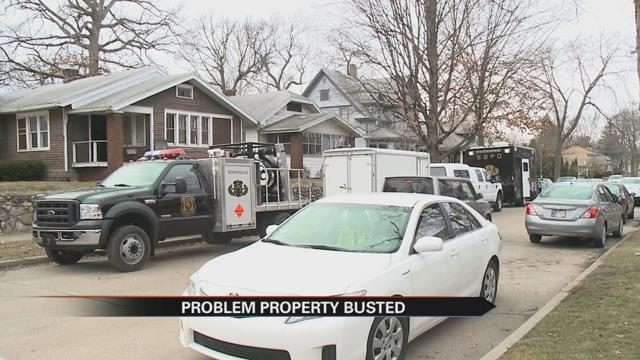 Three people were arrested on the 800 block of 24th street in South Bend after police found several pipe bombs and methamphetamine.

Investigators on the scene Monday say several neighbors came up to them just to say thank you.

Many folks say that home has been driving them crazy for months, so now they get to sleep well knowing their problem is finally solved.

The complaints and concerns from residents just don’t stop about their nuisance neighbor.

Neighbors say the tenants also have a history of run-ins with the law.

“They’ve been out here at least twice with their guns drawn because it’s been crazy.”

Just one door down, neighbor Bill Gilpin says he’s at his wits end.

The suspicious amount of guests popping in and out was a major concern for many on this block.

So it was no surprise when police decided to pop in Monday afternoon.

After arresting the folks inside, crews worked to removed meth and materials used to make bombs.

A scary situation avoided in a neighborhood that’s looking for peace again.

“Hopefully this is the last straw and everything goes back to normal,” Heimann.