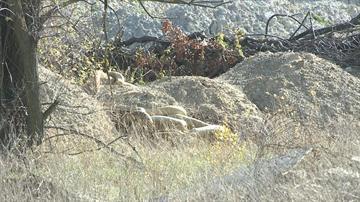 BENTON TOWNSHIP, Mich. - Critics say a proposed development in Benton Township has become nothing more than a dumping ground.In April of 2010, Don Meeks Construction out of Benton Harbor proposed a neighborhood development on Territorial Road. So far no houses have gone up and neighbors say the developer is just using the land to get rid of excess waste.

"There goes a truck now," said Steve Popke. He lives on Territorial Road next door to the project and says everyday he sees trucks dumping dirt on the property."I personally feel it's illegal because I was not notified about a dump being put next to my house," he said.

The lot next door was a just a field when he moved in but now old trucks, trash, and mountains of soil just sit untouched.Popke still has the paperwork from a year and half ago proposing mineral removal so Don Meeks construction could build a pond and a new housing development.
Popke said instead of removing dirt it keeps getting added. "No it hasn't developed. It's been a dump. They've just dumped and dumped and dumped," he said.
ABC 57 News talked to Don Meeks on Friday. Meeks said the dumping is from other construction projects and the property is being used to store the dirt until it can be sold off. Meeks said the original project has been delayed and nothing will start for another two to five years.
Popke said the proposed development would be good for the area but isn’t willing to live with a dumping site so close to his property."I don't think anyone that had anything to do with this would want this next to their property," he said.
Popke said he is seeking legal action against Don Meeks Construction.
Share this article: