Neighbors sick of their road being flooded 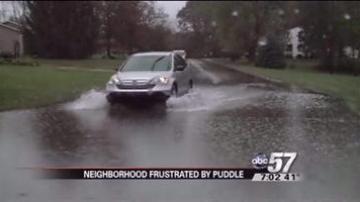 William Frame has been living on Sandybrook Road for twenty-four years.  But he says for the last six years, there has been one big problem.
"Water", said Frame.

Frame says everytime it rains the retention pond right across the street from his house overflows onto the road.

"The pond behind us here is actually filled up to where it is actually above where the water comes out so it doesn't drain very well as you can see", said Frame.

"The way it was explained to me was that after three years if their are no taxes paid, it reverts back to the county. We have called the county numerous times and asked them about it, and they said they don't own it, so it is kind of like no man's land over here", said Frame.

Just twenty minutes later, Supervisor Jimmy Walker came to the scene.  He says he thinks the problem is caused by leaves building up in the drainage system.  Walker said he is going to fix the drainage problem.


"We are going to first try to rake the leaves off the top of the drainage, then we will have to call our vector truck to try and unclog it", said Walker.

While the county is going to step into help with the drainage problem, Walker says the neighbors can help as well by not pushing their leaves in the street.