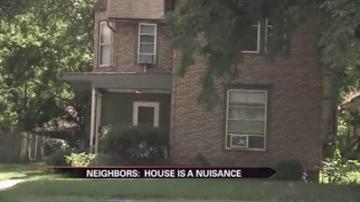 SOUTH BEND, Ind. -- Neighbors are concerned about what they call constant suspicious activity at 610 and 606 West Colfax. We found pages and pages of police calls to the houses, but for the city - it's not enough to step in and do something.

"You just get tired of it. You know, it's exhausting. It doesn't look good, and it seems like when we complain about it, nobody does anything about it," said a neighbor who did not want to be identified.

He's lived in the Colfax neighborhood for years and says he's had enough of these 2 properties.

"There's a lot of traffic, day and night. going in and out. Late at night-early morning and we know it's drug activity. Sometimes transactions take place outside and we see that," said the neighbor.

We pulled the police records for the past 2 years and found multiple complaints about suspicious persons and drug activity.

So we reached out to the property owners. The property belongs to former St. Joseph Count Superior Court Judge Roland Chamblee Jr.

We were unable to get in contact with Chamblee.

We spoke with the city about why the properties, with so many complaints, aren't listed as public nuisances.

The city said police have to find consistent evidence of drug activity before an ordinance can be established.

Neighbors are concerned about what could happen if the activity continues.

"It makes me very nervous. Because you know drug activities usually lead to dangerous situations. You don't know what could happen somebody could get upset and shoot through a window or something and that wouldn't be good," said the neighbor.

Neighbors said the Chamblees own the homes, but the property manager is actually the one who lives there.