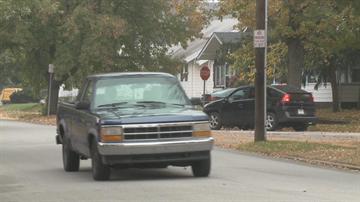 SOUTH BEND, Ind. - Neighbors who live near the intersection of Diamond Avenue and Cleveland Road in South Bend are asking drivers to stop. People said on Thursday drivers are rolling through the intersection instead of coming to a complete stop. In fact many treat the traffic sign as more of a yield sign.

“It looks like a stop sign, but it’s actually a yield sign because no one seems to stop at this particular corner,” said Glenn Mitchell jokingly as he pointed towards the intersection.

Mitchell has lived in the neighborhood for forty years and said this has been an issue for as long as he can remember. "Accidents and close calls, yes, throughout the years,” said Mitchell.
He said the biggest concern in the area is for the kids. Before someone gets hurt, neighbors want to put a stop to this problem.
“There are people that have kids in the neighborhood and so far luckily I don't remember any accidents involving children. It’s something that seems to be waiting to happen,” said Mitchell.
The South Bend Police Department said on Thursday it hasn’t had any recent complaints for the intersection or stop sign, but it will add the intersection to the list of traffic surveys to check on the area.
Share this article: