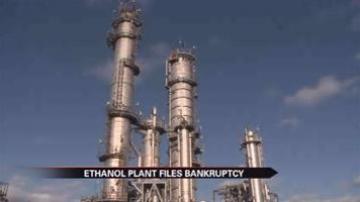 SOUTH BEND, Ind. -- "I was here at the beginning, and it looks like I'll be here until the end."

That was almost 40 years ago, and well before New Energy Corporation moved in next door.

"The thing was built, and when they fired up, it stunk something terrible," said Adkinson.

But now he might not have to deal with that anymore.

All that debt could cause them to close their doors for good.

"I'm afraid if it closes down, they're going to be in trouble with water," said Adkinson.

He's worried about potential flooding in his neighborhood.

He said the ethanol plant is located on land with a high water table, and manages its flow.

If bankruptcy shuts them down, he's worried about what could happen next.

"My main concern is about my neighborhood who have these nice basements and stuff," said Adkinson.

Potential flooding aside, neighbors said it's a sad situation, because they've grown used to seeing that bright, yellow beacon.

"In the summer time, I walk that way," said Catherine Washington, a neighbor. "Everything was nice and clean, and in order."

She's hoping the facility can recover, because the plant means jobs.

"If we don't have it, then I hope something else goes there," said Washington. "And be just as clean and prosperous as the ethanol plant was."