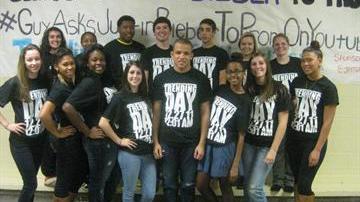 The video featuring Leon Purvis has over 100,000 views!

Purvis said he wants Bieber to go with him to prom as a friend or brother, but not as his date. He claims he is a huge fan.

Purvis also started a Facebook page, hoping for a response back from Bieber.

According to this page, the prom isn't until June 2, 2012, so the Biebs still has some time to think it over.

Here's a look at the video.