New acting attorney general is a GOP loyalist from Iowa 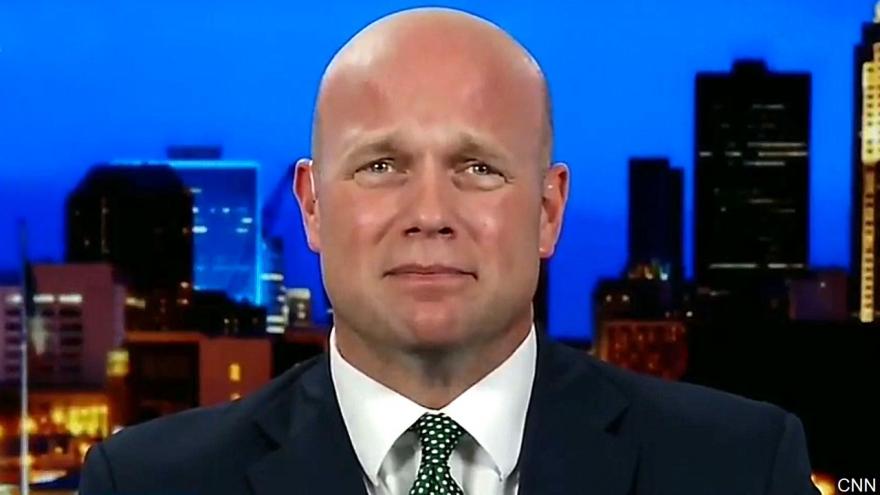 IOWA CITY, Iowa (AP) — The man who will serve at least temporarily as the nation's top law enforcement official is a relatively inexperienced Republican Party loyalist from Iowa who has called for limiting special counsel Robert Mueller's investigation.

Matthew G. Whitaker, 49, will become the nation's acting attorney general following the forced resignation of Jeff Sessions. President Donald Trump announced the appointment Wednesday, saying on Twitter that Whitaker "will serve our Country well" and that a permanent attorney general will be nominated later.

The former federal prosecutor served as Sessions' chief of staff for one year.

The bulk of Whitaker's relevant experience came when he served as U.S. attorney for the Southern District of Iowa from 2004 until 2009, a position for which he was recommended by Iowa Republican Sen. Chuck Grassley, now chairman of the Senate Judiciary Committee. In that role, the telegenic former college football player managed attorneys who prosecuted federal crimes and represented the government in civil matters in half of Iowa.

Critics worry that Whitaker may be unlikely or unwilling to defend the Department of Justice's independence against political interference by the White House, given his history of partisanship and loyalty to Trump. Senate Minority Leader Chuck Schumer said Wednesday that Whitaker should recuse himself from overseeing the Mueller investigation given his previous public comments that appeared to exhibit hostility toward the inquiry.

During a brief stint last year as a conservative legal commentator on CNN, Whitaker often appeared as a Trump defender, saying he saw no evidence the president colluded with Russians during the 2016 campaign or obstructed justice. He wrote last year on CNN.com that Rosenstein should limit the scope of Mueller's investigation to stop him from delving into Trump's finances.

"If he doesn't, then Mueller's investigation will eventually start to look like a political fishing expedition. This would not only be out of character for a respected figure like Mueller, but also could be damaging to the President of the United States and his family — and by extension, to the country," he wrote.

He also said on CNN last year that he could see a scenario in which Sessions' replacement doesn't fire Mueller but "just reduces his budget to so low that his investigation grinds to almost a halt."

Asked whether Whitaker would assume control over Mueller's investigation, Justice Department spokeswoman Sarah Flores said Whitaker would be "in charge of all matters under the purview of the Department of Justice." The agency did not announce a departure for Deputy Attorney General Rod Rosenstein, who appointed Mueller and has closely overseen his work.

Des Moines attorney Guy Cook, a Democrat who has known Whitaker for years, called him a clear thinker and a "no-nonsense guy who is not to be underestimated."

Grassley said Whitaker "will work hard and make us proud," saying that the department would be in good hands during the transition.

Most of Whitaker's career has been spent in private practice, including at a Des Moines law firm he founded with other Republican Party activists in 2009. He has twice failed in bids for statewide elected office, most recently losing the 2014 GOP primary for the U.S. Senate to now-Sen. Joni Ernst.

After that campaign, Whitaker helped start and served for three years as executive director for the Foundation for Accountability and Civic Trust, a self-described "ethics watchdog" that often targets Democratic officials and groups with misconduct investigations and complaints. He has said that Hillary Clinton should have been prosecuted for her email scandal as Secretary of State and that Trump made the right call in firing FBI Director James Comey. He earned $402,000 in 2016, the group's tax filing shows.

Whitaker has also cultivated close relationships with Republican leaders and activists during the Iowa caucuses, the first-in-the-nation presidential nominating contests that occur every four years. He served as state chairman during the 2012 election cycle for former Minnesota Gov. Tim Pawlenty's campaign. After Pawlenty's bid fizzled, he served in the 2012 and 2016 presidential campaigns of Rick Perry, the former Texas governor who is now energy secretary.

Whitaker grew up in the Des Moines suburb of Ankeny. He attended the University of Iowa on a football scholarship, playing tight end under the legendary coach Hayden Fry and catching a pass for the Hawkeyes in the 1991 Rose Bowl. He majored in communications studies as an undergraduate and was interested in broadcasting and film production. He later earned an MBA and a law degree from the school.

After starting his career in private practice, Whitaker first ran for office in 2002, losing a race for state treasurer to the longtime Democratic incumbent Michael Fitzgerald. President George W. Bush appointed him as the U.S. attorney based in Des Moines in 2004.

During his tenure, his office was accused of having political motivations in bringing an extortion charge against then-Democratic state Sen. Matt McCoy, which stemmed from a dispute McCoy had with a business partner. Whitaker denied that accusation, and McCoy was acquitted at a 2007 trial.