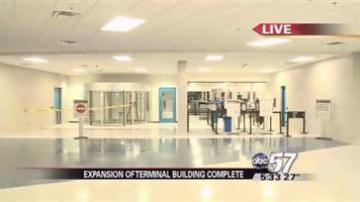 SOUTH BEND, Ind. – Travelers lined up without much of a hassle Wednesday morning at the South Bend Regional Airport to pass through a new security checkpoint, featuring updated screening technology.

Security officials said there were no problems with the T.S.A.’s new advanced imaging technology, or AIT.

The upgrades were installed as part of the airport’s terminal building expansion project.

The end result was unveiled to travelers for the first time Wednesday morning, with the smell of fresh paint still thick in the air.

According to airport officials, AIT scans a person’s body and highlights areas of interest on a cartoon character displayed on a screen seen only by the machine operator.

TSA has said the new technology is less invasive and gives the passenger more privacy.

AIT does not capture an image of each individual passenger. Instead, the computer-generated outline of a person that pops up is identical for all passengers.

Passengers who do not wish to pass through the screening can instead receive a full pat down procedure by a security official.

According to officials, South Bend Regional Airport is one of more than 130 airports nationwide to receive AIT screening devices.

AIT is one of several upgrades unveiled in the $15 billion Capital Improvement Project.

Crews wrapped up construction on the terminal expansion last week, and it was opened to all travelers Wednesday.