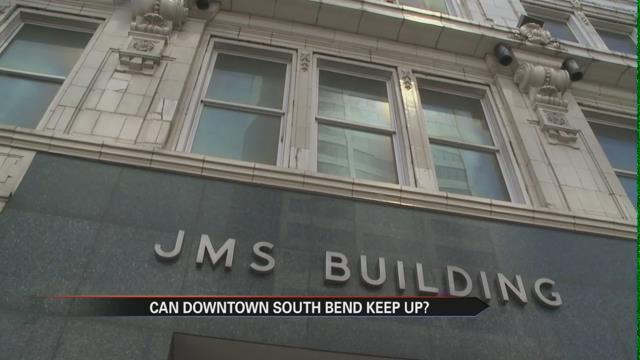 Another major development project is set for downtown South Bend. Three historic buildings are set to be turned into apartments.

The question is, are there enough businesses downtown to sustain all these new residents?

Chris Fielding with South Bend's Community Investment says there is a demand in the downtown area.

“We know the demand is there, number one we need to create the spaces, and number two, grow the population.”

Tuesday, it was officially announced the historic JMS building on Main Street in Downtown South Bend will be turned into apartments.

“Now what we hear from individuals is they want to be downtown. When they walk to lunch they want to be able to meet people, and do business, and shake hands," said Fielding.

The LaSalle and Hoffman hotels are also going to be turned into apartments.

As more people make a shift to live downtown, there is a need for more business development.

Fielding says additional restaurants and retail shops are currently being discussed, and even a grocery store is set to move in.

"That will happen here in the next 24 to 36 months in the downtown.”

There won't be any huge parking lots, or any big box stores.

The goal is to keep things as urban as possible.

Development brings jobs, according to Fielding.

“For every 10 units you put in the downtown it creates about six and a half jobs that are designed and created to actually serve the individual in the downtown," said Fielding.

Market value for these apartment units will range anywhere from $800 to $1,600 a unit.

Work on the JMS building could begin at the end of this summer.