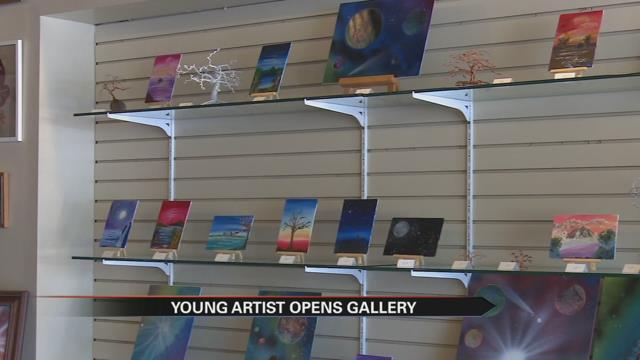 A ribbon cutting in Buchanan Monday afternoon marked the grand opening of a new art studio in the city.

“All artists need a place to work and everyone likes to see art, and so it just kind of fits,” Skye Funnell said.

Funnell is the founder of ‘Skye is the Limit Art Studio’ in Buchanan, and his love for creating is limitless.

“I couldn’t stop if I wanted to,” Funnell said.

So he decided to open a studio of his own after five years of painting and sculpting wherever he could.

“Most of the work here [in the studio] I’ve done like in my yard or sitting on my couch,” Funnell said. “It was just kind of necessary to get some space to work.”

His studio – located on East Front Street in the heart of downtown Buchanan – is both his office and showroom.

Funnell said he’s hoping to feature the work of other local artists, as well.

“I hope that it will bring more traffic through and have more of an active downtown area,” he said.

Andrea Jones owns a nearby custom framing shop – Front Street Framery – in Buchanan and she stopped by Monday to meet her new neighbor.

Jones has grown up in Buchanan and she said the community is supportive of local businesses.

“When you live in a small town, you don’t want to see the town die, so when you have local businesses, you try to support them, try to make them nice,” she said.

You can find big and small paintings, along with unique sculptures, in Funnell’s studio.

“This took me about three to four hours [to make] last night,” Funnell said, pointing at the centerpiece in his studio.

He said he’s excited to bring more art to Buchanan.

“It has been a lot of fun so far and this is just the beginning,” Funnell said.

Some of Funnell’s art pieces run for as little as $20, and he also specializes in live, speed art, so you can swing by the studio and watch him create on the spot.