New audio adds to mystery of attacks on US diplomats 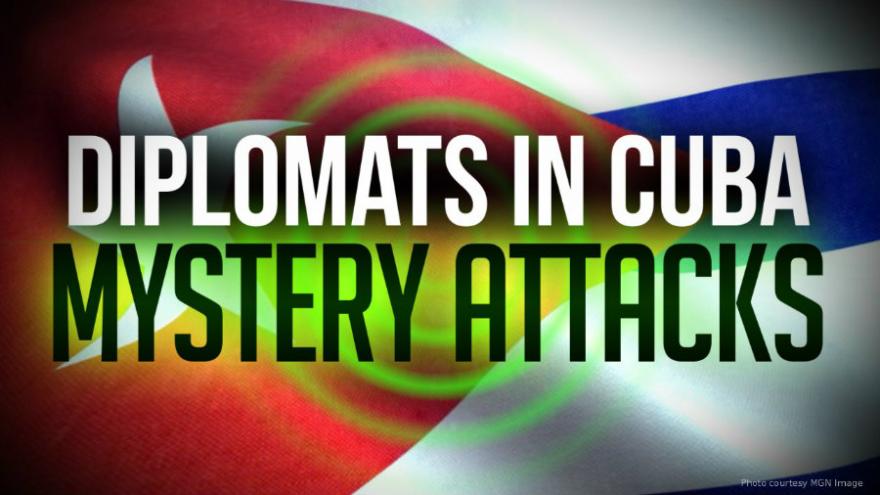 (CNN) -- A new audio recording said to capture what was heard by some US embassy workers amid a series of attacks on American diplomats in Cuba is adding another layer of intrigue around the mysterious incidents that sickened at least 22 US diplomats and family members.

The recording -- obtained by The Associated Press and released on Thursday -- is the first publicly reported audio sample said to be related to attacks that, according to a US official, may have involved the use of an acoustic device.

The device was so sophisticated, it was outside the range of audible sound, the official said. And it was so damaging, the source said, that one US diplomat now needs to use a hearing aid.

But what remains unknown is what kind of device may have been used, where exactly it was placed, and who put it there.

Investigators continue to examine the circumstances surrounding as many as 50 attacks believed to have been carried out against the diplomats, a senior US official has told CNN.

For months, starting late last year, US diplomats in Havana complained of incidents, often late at night in their homes or hotel rooms, that left them feeling ill -- often plagued by a sudden wave of nausea, dizziness and headaches accompanied by strange sounds compared to loud insects or metal dragging across the floor.

Questions also continue to swirl around the Cuban government's involvement in the attacks, given that experts say the country likely lacks the scientific expertise to launch such a sophisticated operation.

On Thursday, President Donald Trump's chief of staff, John Kelly, did not directly accuse the Cuban government of carrying out the attacks but told reporters: "We believe the government could stop the attacks on our diplomats."

"The question that nobody seems to be asking is why would the Cubans do such a thing?" said Steven L. Garrett, who taught acoustics at Penn State University before retiring last year.

A US official told CNN this week that they are investigating whether a third country was involved as "payback" for actions the US has taken elsewhere and to "drive a wedge between the US and Cuba."

"The Cubans are not known for sophistication in physical and engineering acoustics," Garrett said.

But Garrett did note who he felt was ultimately behind the attacks citing Russia's long-standing specialization in non-linear acoustics.

"The fact that the focus is on acoustic source, then my money would be on Putin," he said, referring to Russian President Vladimir Putin.

While Russia's focus on non-linear acoustics was focused on underwater applications, Garrett said they, along with a handful of other advanced nations -- including Germany and France -- maintain the scientific infrastructure to develop a device capable of manipulating acoustics in the air.

"Putin likes sowing chaos and his acoustics establishment has the requisite technical expertise," he said.

The unnerving mix of high-pitched tones in the recording is similar to descriptions made by diplomats that were in Cuba at the time of the attacks, and the audio file has sparked interest among a community of acoustic experts after it was analyzed by, Kausik Sarkar, an acoustics expert and engineering professor at George Washington University.

While the sound heard in the recording seems to be similar to descriptions provided by US embassy workers in Havana, Sarkar told CNN that the audio file raises more questions than answers around claims that a sonic weapon could have been used in the attacks.

Sarkar told CNN that he conducted a spectrum analysis of the audio file that was recorded on a cellphone -- a point he stressed would limit the ability to actually determine the sound's decibel information.

"It's like hearing a performance recorded by a smartphone at a concert hall rather than actually hearing it live," he told CNN on Friday.

The audio file also only "contains the audible part of the spectrum" meaning "we don't know the acoustic energy in the lower frequency (infrasound) and higher frequency (ultrasound) ranges," he said, adding that there could be lot more sound energy pounding the ears of victims in those parts.

"Very high energy could potentially lead to hearing losses and other harmful bio-effects. However, it remains intriguing how that itself can cause brain damage," Sarkar said.

The absence of infrasound and ultrasound frequencies in the newly released audio file means it is safe for CNN to broadcast and release to a wider audience, according to Dr. Robert Jackler, who specializes in otolaryngology and head and neck surgery at Stanford University School of Medicine.

But there is speculation that inaudible frequencies that may not have been picked up in the recording could have caused harm, Jackler said.

Medical specialists and acoustics experts agree that few conclusions can be made based on the newly reported sound recording, but its release has prompted wide-ranging speculation over claims that a "sonic weapon" may have caused the symptoms reported by State Department employees in Cuba.

"It is possible to create a complex sound of certain frequencies and acoustic patterns that could affect our body function especially brain function," said Dr. Jeffrey Kim of Georgetown University's otolarynology department.

"There are functional MRI studies that even non-perceivable low frequency sounds can stimulate several parts of the brain involved in emotion, memory and cognition," he said.

Kim also pointed to a series of studies on industrial windmills that have suggested that people who live near the windmills have higher incidence of fatigue, annoyance, sleep disturbance, tinnitus and dizziness/imbalance.

"So it is possible that chronic exposure to the certain noise characteristics can result in the symptoms recently reported by the Cuban diplomats, especially if they were exposed the noises for prolonged duration and at high volume," he told CNN.

Those symptoms suggest the cause may involve the part of inner ear that controls balance as sounds in the auditory part of the spectrum do not result in symptoms consistent with those reported by US diplomats in Cuba, according to Jackler.

"But infrasound, that can stimulate the movement of the membranes in the inner ear and produce that feeling of vertigo, nausea," he said.

While exposure to high-powered inaudible frequencies can injure humans, experts remain speculative over claims that a device was used to deliver infrasound or ultrasound in the Cuba attacks.

Three US officials told CNN this week that a sophisticated device operating outside the range of audible sound was deployed either inside or outside the residences of US diplomats living in Havana.

Since the 1990s, the US military and private companies researched infrasonic devices that could cause behavior changes at frequencies too low to be audible.

James Parker, an expert in sound and law at the University of Melbourne in Australia, told CNN that infrasound is probably the hardest to weaponize.

"There are (sonic) devices that are used as a weapons, but none that I know of use infrasound," Parker said.

And while infrasound may cause similar symptoms to those reported by US diplomats, those wavelengths are difficult to focus on a small area making it unlikely they were delivered by a device in the Cuba attack, according to Qin Jun, an acoustic engineer at Southern Illinois University.

Like infrasound, ultrasound is not audible. With ultrasound, the frequency is higher than what humans can hear.

Jürgen Altmann, a physics professor at Technischen Universität Dortmund in Berlin, said it's not clear what type of device -- if any -- may have been used in Cuba.

But he said ultrasound devices can be challenging to use, especially if they're placed at a distance.

"One may speculate whether ultrasound (that is inaudible) was used, but projecting it over a considerable distance and/or through walls or closed windows is difficult," Altmann said.

Also, ultrasound would have likely been reflected by the walls of a structure if placed outside, according to Qin.