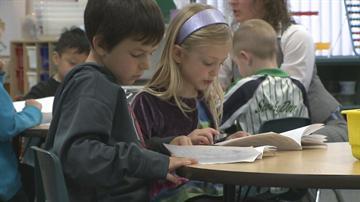 NEW BUFFALO, Mich. – New, brain research is being used in New Buffalo Elementary School classrooms and the results have been extraordinary.

Instead of teaching the alphabet in a traditional sense, instructors are using a new language to teach reading. It’s called ‘Re-wiring the Brain’. Only a handful of schools in the country are on board.

If you sit in Ms. Selir’s kindergarten classroom you’ll see something, maybe, you’ve never seen before. Every kindergartener is reading a book and pronouncing words that other five and six-year-olds, usually, would never read.

“Fan-tas-tic,” spelled out one of Selir’s students at the chalkboard. Her brain has been re-wired to read the sounds associated with the order of the letters inside of a word, instead of the letters themselves.

“It used to be we just thought it was the 26 letters of the alphabet and that’s it,” said Laura Selir. “But there are 44 sounds the kindergarteners all learn.”

“We now know every child can read if taught the right way,” said Erika Milovich, the Instruction Literary Specialist at New Buffalo Schools.

Milovich helped implement the program in ever grade at the school and said that the results speak for themselves.

On state testing this year New Buffalo improved K-5 reading and writing scores, moving into the top three schools in Berrien County. It was the first time New Buffalo made that mark.

Milovich said it’s just the beginning. ‘Re-wiring the Brain’ is only in its second year. “They’re confident and probably some of the best teachers in the state at reading if not the best in the country,” she said.

Milovich said all New Buffalo students are testing at or above adequate levels for their grade.

‘Re-wiring the Brain’ is only being used in eight classrooms in the United States. All are in Michigan.