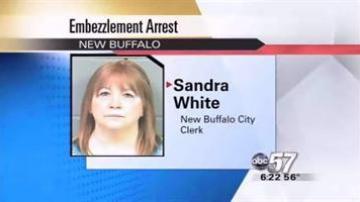 NEW BUFFALO, Mich. – The city clerk of New Buffalo is in the Berrien County Jail for embezzlement charges.

According to detectives, White had been under investigation for about six months. She’s accused of swiping $90,000 from the city’s parking and boat ramp funds.

White had been on administrative leave since October when the allegations surfaced. She’s worked for New Buffalo since 2003.

White is set to be arraigned Tuesday afternoon and she could face up to 15 years if convicted.

Stay with ABC57 for updates on this developing story.