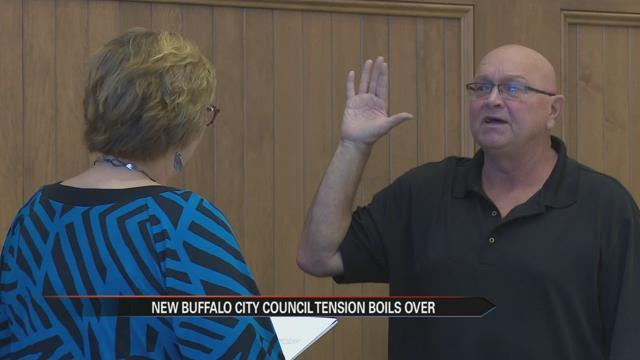 Months of drama between city officials came to a head at New Buffalo’s penultimate council meeting before the November election.

The council was scheduled to meet Thursday to appoint a new face to its membership, but ended up losing one in the process.

Councilwoman Donna Messinger told the council she would not continue to with the meeting right before leaving.

“Because of talks of shooting me on this video and until I can hear exactly what was said, I cannot continue,” she told the council.

Messinger is alleging a city employee was caught on camera recently, making a threat against her.

The mayor and city manager said they’re investigating that threat.

But that wasn’t enough to keep Messinger around for Thursday’s special session.

“I didn’t quit, I could’ve resigned a long time ago, I’m just filling out my term,” she said.

Messinger says she often faces battles with this board, but decided walk out on her own terms after airing her grievances with the city manager.

“Something we always talk about, transparency and it’s something we don’t have with our current leadership,” she said.

Quite a few folks say the lack of transparency has kept residents at odds with city hall.

“It just doesn’t seem to get any better at city hall,” said resident Susan Gotfried.

“A lot of things are being done the wrong way, there are procedures and protocol for doing things a certain way,” said resident Ray Kirkus. “I don’t think this council is doing it.”

Residents say quite a few controversies have caused a divide.

And with open seats to fill in the city’s government, the challenge of winning residents’ trust has become greater.

“It’s kind of sad to me what’s been going on, but if we move forward now, hopefully things can progress in a positive manner,” said resident Mark Robertson.

Robertson was appointed Thursday to fill one of the vacant seat council seats.

As a longtime member of the community, many hope he could be a positive push for to the wave change coming to new buffalo.

“It’s good to have somebody that’s born and raised on the council just to throw a little diversity to the mindset,” said Mayor Lou O’Donnell.