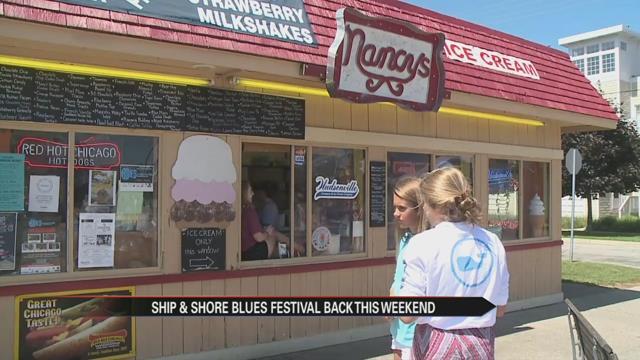 The Ship and Shore Blues Festival will take place in New Buffalo August 7th-8th at the Lions Beachfront Park.

The Artistic Director said they are hoping boaters and tourists from all across Michiana will come on over and support New Buffalo.

John Moultrie said, “We’ll have 9 food trucks, 22 craft breweries and wineries, we also have a plethora of activities for kids!”

Instead of closing down Whitaker Street in downtown New Buffalo, the festival will pop up shop by the lakeshore.

Folino said, “It’s good to get something else out here since with Ship and Shore they don’t close this down anymore so it will be down there and a lot of fun.”

“Hoping for a big crowd at the end because I will be DJ’ing at 10 to close it out," said Folino. "!There will be a lot of ice cream going out this window!”

He is doubling as a Disc Jockey for the festival.

The owner of Hidden Gem in New Buffalo said she opened her small business in March.

Lisa Gawron said, “We’re really excited to have the Ship and Shore back! It’s going to be a lot different than it was last year! But I think it will definitely bring a lot of people to town, lot’s of people shopping!”

Craft said, “I don’t know how to explain them, just kind of a wilder feeling, it’s kind of nice for condos mean here we’ve got this woman with her fish dangle earrings.”

Artists and vendors alike say they rely on the summer season to stay alive.

Craft said, “I love that this little town is quiet a lot of times, but then when you have a festival it changes the whole mood and it’s very exciting!”

John Moultrie said he didn't want the festival to be cancelled so he gave it more life.

Moultrie said, “Ship and Shore had a 31 year run. About a year ago the prior organization decided they didn’t want to do it which I think left a gaping whole in the business community and tourism.”

Kids under 14 are free for the festival. Adults can buy tickets starting at 11 a.m. on Saturday.