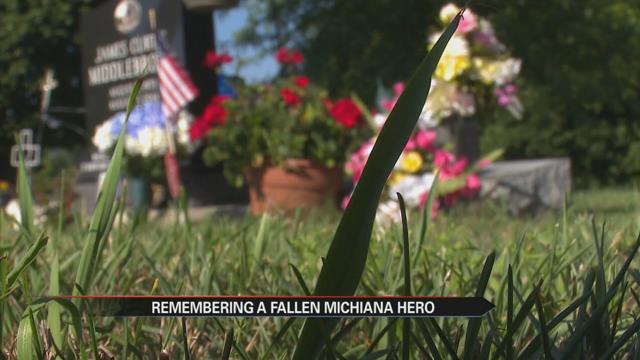 Friday evening, friends and family came out to his grave to remember him.

The ceremony started with a Scottish song for warriors played for their hometown hero.

“He made everybody feel like they were a family,” said Carolyn Middlebrook, Jamie Middlebrook’s mother.

“Not only was he my assistant chief, but he was my best friend,” said New Carlisle Fire Chief Joshua Schweizer.

His best friend was Jamie Middlebrook, a New Carlisle firefighter who died in the line of duty back in 2014.

“It was probably one of the worst days of my life,” said Chief Schweizer.

But today, his friends and family gathered at the New Carlisle cemetary to celebrate his life and legacy.

“If we’re ever going to find peace with what happened in his loss, it’s by remembering him,” said Tuszynski.

And they remembered him with stories, prayers, and a ceremonial bell toll, which signifies the loss of a comrade.

“I miss him,” Chief Schweizer said.

But through tears and laughter, Jamie’s mother Carolyn says the community has been an incredible source of solace and support.

“It’s nice to live in a small town, because everybody knows everybody, and everybody cares about us…they’re always checking on us,” she said.

And she says, that’s exactly what Jamie would have done. That’s the legacy he left.

“He leaves a great legacy…anything that we do we point to him and use him as an example,” said Chief Schweizer.

“Jamie was full of life, full of energy. His dedication to the department was amazing…he brought a lot of energy and training and leadership as assistant chief, and that’s very much a part of our identity even today,” New Carlisle firefighter Mike Tuszynski.

“I mean I could just go on all day. He was just a fun son to have,” said Carolyn.