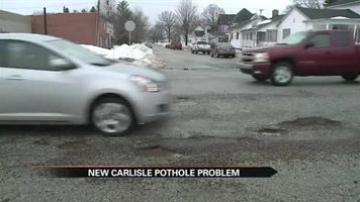 NEW CARLISLE, Ind. -- It’s the problem that just keeps growing --potholes. There are dozens of them in New Carlisle on US20 between the Laporte County line and 31/20 bypass.

City council member John Gelow said he is fed up that the Indiana Department of Transportation has not been out to fix them.

“We’ve complained about it several times but they seem to just ignore us out here.”

Cars passing through are forced to swerve, and if they don’t, they might damage their tires.

Gelow said INDOT is responsible for fixing the problem but they haven’t. So he’s even taken the matter into his own hands.

“There have been times I’ve brought my own patch and thrown it in that particular spot here. I mean I purchased it myself from Lowes and came out and put it in the hole there because they just don’t come out and fix them” said Gelow.

One pothole we measured was three feet wide and six inches deep.

“I’ve been to Michigan City and back and it is horrible. It has to be addressed soon because I have grandchildren that are driving on the road nowadays and it isn’t the lack of experience that is going to be getting people in accidents.”

Gelow believes if INDOT continues to wait is it’s only going to spell more problems for drivers.

“I don’t know if anybody’s had any damage to the front end of their cars or their wheels but I’m sure there’s going to be if they don’t do the patch job quickly,” he said.

ABC57 reached out to INDOT to see if and when they are scheduled to come patch up the potholes. They have not gotten back to us yet.