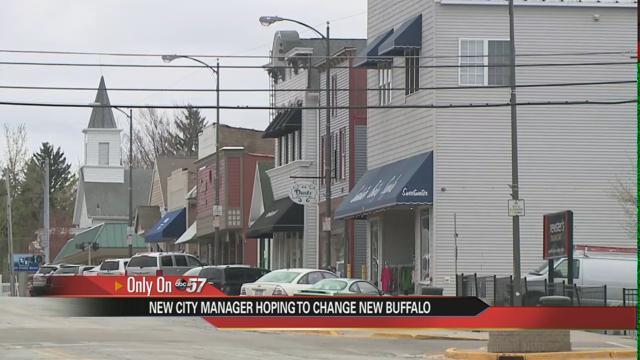 A new city manager has taken the job in New Buffalo. Robert Johnson worked in Detroit in city development and he came to New Buffalo knowing they've had 5 city managers in the past 7 years.

Robert Anderson said, “The troublesome nature of the dialogue in this community, the fact that people are passionate about this community is really an opportunity.”

In recent months the city has been plagued with litigation trouble and government official turn over. David Blum owns a small business downtown and he said it appears that Anderson had a good background for the job.

David Blum said, “The situation is bright but we need to get behind the city manager and not throw up a lot of roadblocks. Compare it to Mayberry except it's not as benign or as friendly. There's a lot of litigation goes on!”

Blum said, “They go to the courts and waste time and waste money and sometimes I think that this town presents a business prevention force rather than encouraging business.”

Anderson said growing business is something he's passionate about.

Anderson said, “I always wanted to get back to Michigan for the right opportunity and I think this is a community where I can make a difference, I can get my arms around this. In Detroit it was kind of elusive.”

As director of planning and development in Detroit, Anderson said he had a lot to manage while the city simultaneously filed for bankruptcy.

Anderson said, “I had a staff of 156 when I took over, over $200 million in federally funded activities, I was on 7 boards and commissions.”

Governing magazine coined him as one of the top 10 people who could save Detroit. And he says he wants to save New Buffalo, too.

Anderson said, “Right now it seems like a lot of the dialogue is going backwards. And trying to influence things that have already taken place. What we really need to do is pull the community together looking forward, and that master plan project will help us to that.”
Anderson said his first project is getting the city budget in order in the next three weeks.