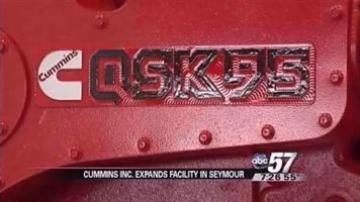 Cummins Inc. announced on Tuesday, that they plan to pour over $200,000,000 into an expansion in Seymour.

The company said that they will put the money toward new warehouses, more engineering, and additional parking for workers.

The mayor of Seymour, Craig Luedeman, is ecstatic about this expansion.

Luedeman said,"This is like the World Series, the Super Bowl, the Daytona 500 all rolled into one," said Seymour Mayor Craig Luedeman. "It's one of the biggest deals you could ever have in Seymour, one of the biggest announcements we've ever had in the history of Seymour."

Cummins Inc. currently has about 525 workers at the Seymour plant.