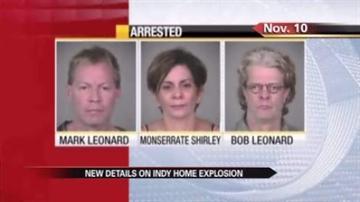 Now, there are new details emerging.

Investigators said the blast was due to an intentionally damaged gas line sparked by a microwave set on a timer.

Three days after the explosion, the homeowner at the center of the investigation, Monserrate Shirley said she was a victim.

Later throughout the investigation the son of one of the suspects came forward and told investigators that his father blew up the house on purpose to collect on the insurance.