New Details: Man shot in the back now paralyzed from the neck down 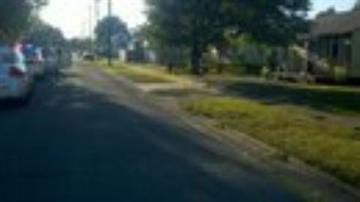 SOUTH BEND, Ind. - A 46-year-old man was shot in the back while standing on the front porch of a home he was visiting.

His nephew told ABC 57's Jaclyn Kelley Saturday night that his uncle was at the wrong place at the wrong time. Officers said that the victim was not the intended target in the shooting.

Neighbors describe the house as a "drug house," with, "a lot of traffic." --officers would not confirm that drug activity takes place at the residence.

South Bend Police Officers told ABC 57's Rachel Glaser on the scene of the shooting that a quadriplegic was shot in the back, it turns out the victim was paralyzed because of the shooting.

He was shot in the back, through his spinal cord and the bullet lodged in his lung. His injuries are described by investigators as, "severe" and he is listed at Memorial Hospital in critical condition.

The shooting happened before 6 p.m. Saturday at 3300 West Dunham.

Police responded three times to reports of shots fired at the same address throughout the day, all drive-by-shootings.

11 shell casings were found on the scene.

Officers are looking for a four door red Kia, witnesses said the car was occupied by four.

ABC 57's Jaclyn Kelley is now working this story for our late show. You can follow Jaclyn on Facebook by clicking here.

Stay with ABC 57 News for the very latest on this developing story.