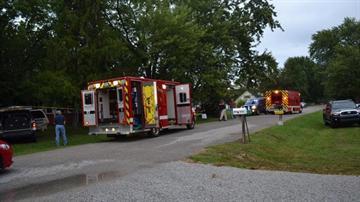 KOSCIUSKO COUNTY, Ind. -- The Kosciusko County Sheriff's Department released new details in the fatal shooting of Gary Helman, allegedly by a registered bail agent attempting to apprehend him. A police report reveals a reporter may have helped the bond and recovery agents establish Gary was in the home.

According to Michael Thomas, he went to the Helman home on August 25 to try to apprehend Gary Helman who was wanted on a warrant for failure to appear.

Martin and Foster had been working on the case for two months and had a plan to make the apprehension on August 25.

Foster told police the plan was for reporter Stacey, of Stacey Page, to interview Helman, confirming he was in the house.

On that day, Stacey was at the home from 3:30 p.m. to 5 p.m. and then left the home, according to Foster's statement in the report.

Stacey allegedly texted Martin to verify Gary was in the home and told him what each person in the house was wearing, according to the report.

Foster allegedly had Stacey call the home and confirm Gary was still there, then he went to the front door and knocked and yelled "warrant" repeatedly.

He said they did this because they hoped Gary would run out the back door of the home.

In his interview with detectives, Foster said he was at the front door 10 to 15 seconds and then heard shots fired.

Foster told investigators he was wearing a body camera during the incident. When police reviewed the video, they determined it was consistent with Foster's statement.

Thomas, in the back of the house, told police he and Martin were at the back door when Larry came out.

Martin went into the house and then Thomas heard gunshots, according to the report.

When a bullet went by his head, Thomas jumped off the deck. He made contact with a neighbor and asked them to call 911.

Martin was in the front yard with a gunshot wound and Foster dragged him between two cars.

Thomas went to help Martin and Foster went to the road to direct emergency vehicles, according to the report.

When police arrived, they found Larry Helman on the back porch with a gunshot wound to his back.

ary Helman was in a back bedroom with a gunshot wound. He was pronounced dead at the scene.

Martin was between the cars with wounds to his shoulder and arm and leg.

Thomas and Foster were taken to the sheriff's department for an interview.

Martin was in surgery and could not be interviewed.

Stacey Page posted a statement on her Facebook page, then deleted it. She then posted "I was contacted by Barnett Bail Bonds. We will have the full, accurate story later today."