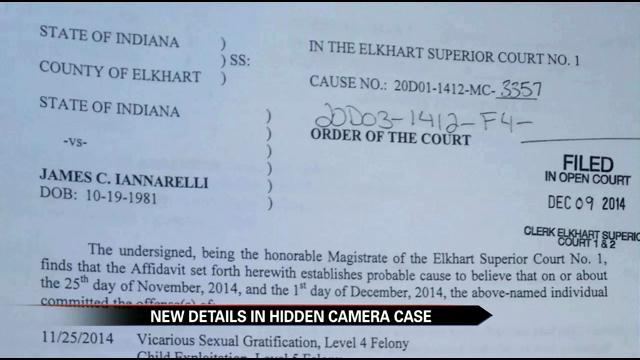 James Iannarelli, a science teacher at West Side Middle School and a wrestling coach at Memorial High School, is facing seven felonies for allegedly recording video of boys in the locker room.

On December 1st the Elkhart Police Department interviewed two Memorial High School wrestlers who said that he saw a video on Iannarelli's iPad. The video was of students undressed and showering in the West Side Middle school locker room.

Court documents say Iannarelli was recorded placing the iPad in a locker in the West Side Middle School locker room.

While being questioned by police, Iannarelli revealed that these recordings had been happening for four years.

An Elkhart officer reviewed the iPad and found videos of boys who are 12, 13 and 14 years old.

Bunny Bender of Elkhart has seven grandchildren in the Elkhart school system and says she mortified.

“It's sick. These people are sick who do things like this and they need help or something, ya know. And never be able to teach again or be around children again. It's not right,” says Bender.

Iannarelli is charged with:
Iannarelli is being held on bond for $100,000 and a hearing is scheduled for December 18th at 1:30 p.m. at Elkhart Superior Court 3.
Share this article: