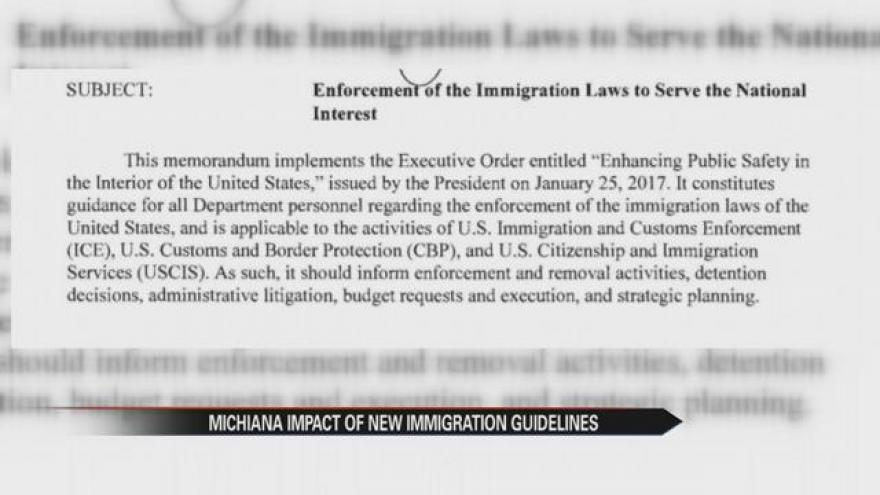 The Department of Homeland Security has released documents that lay out President Trump’s approach to enforcing immigration laws. ABC57’s working for you to break down how this could affect Michiana.

Elkhart Chief of Police Ed Windbigler says as officers they take an oath to uphold the law. Since no state laws have changed they’ll be following the status quo.

“On a state level, we don’t have the authority to detain and send someone back to deport somebody, that’s a completely different beast,” said Windbigler.

A different beast that will not force changes in how Elkhart Police do their jobs.

Chief Windbigler is reacting to two Homeland Security memos that were released Monday and laid out in detail Tuesday afternoon.

One is the Enforcement of the Immigration Laws to Serve the National Interest. In that document, there are guidelines for all the department personnel regarding the enforcement of immigration laws of the United States.

The other is called implementation Of The President's Border Security And Immigration Enforcement Improvements Policies. Here, new policies designed for undocumented individuals are outlined as well as how to detain and remove those who are in the United States without legal entry.

“We don’t know where president trump is going to take us from this point on, if he changes the federal law to mesh with the state law that’s one thing, but currently they don’t,” said Windbigler.

The chief does not want Elkhart families to panic. He says if they are victims of crime, there's no need to fear reporting it.

“If somebody is reporting a crime, here again, we don’t want them not to come report that  crime because maybe they’re not here legally.”

The Trump administration emphasized that it is leaving intact the DACA program, that’s President Barack Obama's protections for Dreamers.