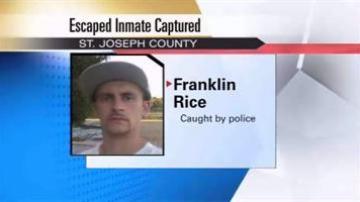 The sheriff has implemented these policies because Franklin Rice escaped from the jail after he took a bread delivery truck and crashed through a gate of the jail and met up with two other suspects.

Police had been listening to phone calls between Rice and the two suspects, 27-year-old Phetsamone Kaviyakone of Bremen and 21-year-old Priscella Minjarez of South Bend, and determined this escape was several weeks in the making.

Sheriff Mike Grzegorek made the arrests in Bremen Tuesday afternoon.

The sheriff is bothered by the escape. This is the first time someone has broken out of the jail.

"Bothers me greatly. I take it as a  personal offense," said Grzegorek. "And it makes me want to make sure that our policies, procedures, all of our practices are reveiwed and are continually reviewed to make them stronger and as strong as they possibly could be made. So we can ensure that this will not happen again."

Over the next several days and weeks, Sheriff Grzegorek will be reviewing this incident to make sure those policies are constantly reviewed.