New Notre Dame chief of police to focus on community 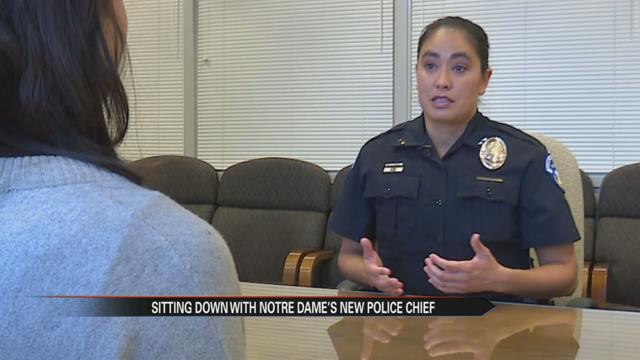 “I came for a job to help pay the bills, and was not even like a Notre Dame fan,” Shibata said.

She started out on the night shift 12 years ago at the Notre Dame Police Department.

From there, Shibata worked her way up, finally becoming the department’s first female chief.

This school year is her first in the senior role.

“Things are going well. The year is off to a great start,” Shibata said.

It’s also been a busy start.

Not only is Shibata running the security for events, but she’s doing it during some major campus construction.

“Every game is a little bit different,” Shibata said.

Home football games are where Shibata collaborates with other local law enforcement agencies.

She says it’s one of the best parts of the job.

“We spend a lot of time together during football season,” Shibata said.

However, her position involves way more than just game days and traffic.

Shibata takes on the job with a unique perspective on sexual assault, an issue plaguing universities across the country.

Her department has already responded to two reports of rape on Notre Dame’s campus this school year.

“Before I was even a police officer, I was involved with sexual assault and domestic violence. I was actually an advocate with SOS,” Shibata said.

She thinks the key to preventing attacks is fostering a culture in which they aren’t acceptable.

Healthy relationships are also a big part of what Shibata says she’ll focus on.

“We don’t have a lot of crime, so we have time that we can spend helping people learn how to be safe in their everyday,” Shibata said.

At a time when community policing is under a microscope, Shibata isn’t backing down from building relationships.

“I’m excited to be in this role at this point in history with so much going on in law enforcement,” Shibata said.

The new chief says the impact her department has reaches far beyond campus boundaries.

“We know that we are working with future leaders of the world,” Shibata said.