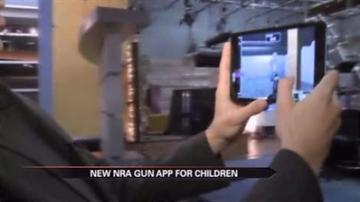 The National Rifle Association criticized violent video games after the Sandy Hook Elementary shooting but now it is releasing a new mobile phone and tablet game that puts a virtual gun in the hands of users.

The app is for children, ages 4 and up.

Creators say it is about teaching gun safety but some argue the NRA is taking a big risk.

The NRA says there's no blood in the game and you're not shooting at people, only coffin shaped targets.