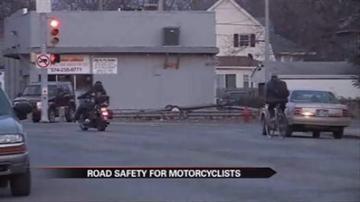 Numbers have been released that show that since Michigan repealed its mandatory helmet law for motortcycle riders; there was a major increase in motorcycle accident deaths last year. Now there's a bit of a debate around the necessity of helmets and biker safety.

Spring is here, the weather is nice, and bikers are hitting the streets! But some think motorcyclists need to take precautions.

University of Michigan released stats that show that there were twenty six motorcycle deaths in Michigan last year that could have been prevented if the riders were wearing helmets.

But for many dedicated riders, the freedom of riding without a helmet outweighs the cost. "Wearing a helmet makes you feel trapped. I mean this is freedom we do this for a reason, and its just straight freedom." Explains long-time motorcycle rider, Indian John.

Police say they do not issue tickets for not wearing a helmet, but it is definitely not the safest decision to make.

"The law states that you do not have to wear a helmet but we still suggest that you wear one its just that much more added protection." explains Kelly Laesch, crime prevention coordinator of the Berrien County Sheriff's Department.

And police have a message to cars that share the roads with motorcycles through the warm spring and summer months,

"Remember that they don’t have any shell around them so just give them their space."