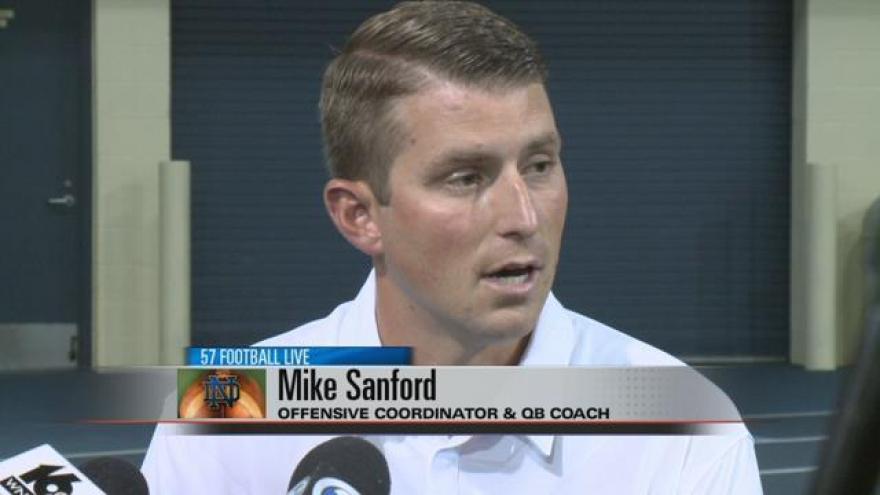 Mike Sanford comes to Notre Dame with an impressive resume.

He spent most of his career at Stanford, then moved on to Boise State.

He even caught the eye of Ohio State's Urban Meyer, but it seems he found the right fit here under the golden dome.

His great relationship with Head Coach Brian Kelly could be the beginning of offensive greatness for the Irish.

When Head Coach Brian Kelly came knocking on Mike Sanford's door, he was hoping to hire one of the best quarterback coaches in the business, but he found more than he expected.

"Every day is an affirmation of what I had hoped going into it," Coach Kelly said.

He found a coach that could lead more than just his quarterbacks.

"He's a great communicator. And I think if you're clear in your communication, you can reach players regardless of what the age is," Coach Kelly said.

Sanford it seemed was the perfect guy to take the reins on Kelly's entire offense.

"The thing I feel so good about this is, this is our offense, this is Notre Dame's offense, and ultimately it's our players offense because we're going to suit it and continually have already evolved this offense to fit what our players do well," Sanford said

The respect between the two coaches is mutual.

Kelly is now six years into coaching one of the nation's most prestigious college football programs.

Sanford said part of his decision to come here was because the opportunity to grow under someone of Kelly's tenure.

As for the details like who will handle the play-calling this season, Sanford and Kelly say they'll discuss who will do that later along with Wide Receivers Coach Mike Denbrock.