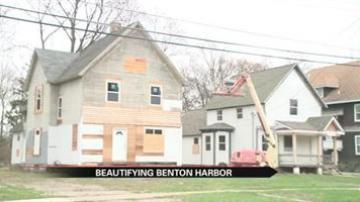 It’s been a trying year for the city, and as it gets back on its feet, city leaders want neighborhoods to reflect that.

Vacant and abandoned homes, trash, and unkempt properties line city streets. But now several ordinances are in place to beautify the city of Benton Harbor.

“We need to make sure that we take care of our own, make sure our community is as beautiful as anyone else's,” said Watson.

The city will now require landlords to hire a city approved inspector to inspect properties once every two years.

Property owners are also now required to maintain their lawn and to keep their properties clean of trash and liter. If residents don’t comply, Watson said they will not be fined, but will receive notification from the city.

It’s a step that could get more traffic into the city.

“Basically making sure quality of life in the city is consistent and that people take pride in their residence,” he said.

Is the city feeling any pressure with the much anticipated opening of Harbor Shores Resort?

“No that has nothing to do with it. This is just normal housekeeping stuff for lack of a better word,” Watson explained.

Watson said because of reduced staffing the city is now relying on its residents to do more maintenance of their own.