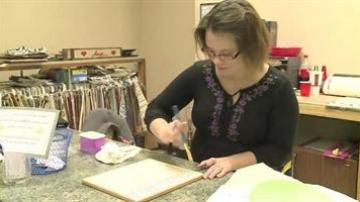 SOUTH BEND, Ind. -- The holiday pop up shops in downtown South Bend are open for business, but they some of the store owners say customers haven't seemed to notice. So far they say business hasn't been as good as they had hoped.

"It's a little slower than what I expected," said Megan Chlebek, owner of Upstyle.

Chlebek has not seen a high volume of customers so far this season.

"The foot traffic has been slow," said Chlebek.

Other businesses say it's all about location.

"The majority of the foot traffic is down on the other block. They don't really see us down here," said Lisa Miller, owner of Forever Clean Soap Works.

"I think that there is not a lot of retail in the 200th block. People that work downtown either work in the 100th block or north and the 200th block does not get as much attention," said Dana Barton, owner of Artisan Alley.

Store owners say because they are located inside of Center City Place, across from the State Theater, they lose out on some of downtown South Bend's pop up shop advertising.

"There is nothing outside that shows that there are stores inside, and we are limited on what kind of signs we can put out there," said Miller.

Even with the slow business, they say their time is worth it.

"It's a great learning opportunity of being in a store, and knowing what kind of things to work on," said Chlebeck.

The pop up shops will be downtown until December 28th.

Click here for more information on this year's pop up shops.