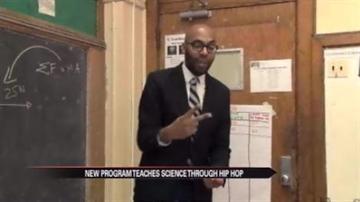 NEW YORK -- Hip-hop and science, the two don't often mix, but they do in New York.

It's the front lines of urban education, and one visionary college professor has teamed up with a professional rapper to help his students.

The professor is using the popular music genre in the classroom with his pilot program called Science Genius. It is now launching in ten schools in New York City.

The goal of this experiment is to improve students' science grades.

"The idea is to take what they're looking for already, combine that with their culture, introduce them to science which  something they're inherently good at anyway and open up the possibilities," said Christopher Emdin, a professor of science at Columbia University.

Teachers implementing the program said they think it'll inspire the students to focus on the details of their course work, while also making it easier for the teachers to stay on top of the students' work.