2017 has been a standout year for extreme weather. Three major hurricanes hitting the US, wildfires engulfing the west, and heat waves sweeping California and Arizona.

American citizens are being affected by these events, and now more people are attributing extreme weather events to climate change.

We know this because the newest report of Climate Change in the American Mind has been published by the Yale and George Mason Universities’ programs on climate change communication. The report is based off of a survey conducted from October 20th to November 1st, of 1,304 American adults. 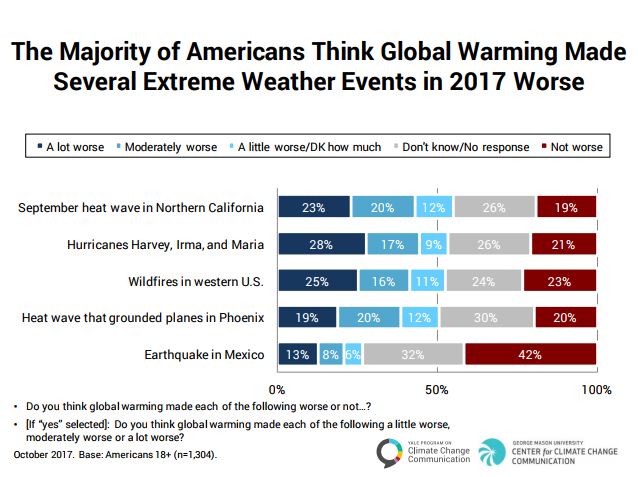 The results mainly show that more people believe in climate change and are seeing its affects first hand.

Here are a few statistics from the study:

- 54% Understand it's human caused. 33% believe it's caused by natural changes.

- 44% Say they have personally experienced effects of global warming. This is an increase of 13% since March 2015.

Awareness is clearly increasing among Americans. However, other statistics from the study indicate that there is a lack of urgency to solving the problem.

For more statistics, charts and information, you can read the report, Climate Change in the American Mind.