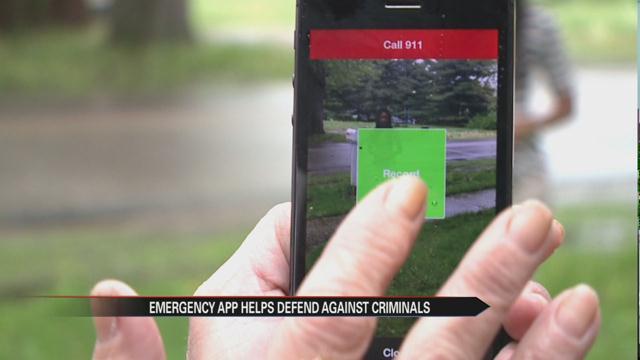 A smart phone app allows you to record video and send that video to your contacts and the police in the event of a crime or emergency.

“If we see suspicious individuals that's where this app really comes in handy,” Catherine Miles explained.

Miles is accustomed to keeping a watchful eye on people in her St. Joseph County neighborhood.

She serves as president of the Osceola Neighborhood Watch group on Facebook.

“We alert each other as to crime in the area,” she said.

They also keep each other informed about new security and safety measures, such as the smart phone app called Ice BlackBox.

“I wish we have had this for a long time,” said Miles.

This is how it works.

You download the free app on your iPhone or Android, allowing  it to access to your contacts and location in case of an emergency.

And with just one click of the button, smart phone users can use the app to record anything that is happening around them.

Ice BlackBox then said it will send your video and precise location to family, friends, and most importantly, the police.

The video is stored forever in the cloud.

Elkhart Police Sergeant Chris Snyder said this application could be beneficial to preventing and solving crimes.

“You can take a video and the fact that it sends it to the cloud for storage, which means that even if its deleted from that phone or we don't have access to that phone, that video is still available which is very beneficial to law enforcement,” said Snyder.

He said video evidence of crimes increases the chances of an arrest, and decreases a criminal's motivation to commit crimes.

“With an app like this where you can push a couple of buttons and you're recording audio and visual of what's going on, that's a big deterrent for a lot of criminals,” explained Snyder.

Miles said she is lucky she hasn't been in a situation where she's needed to use this app, but she encourages everyone to download it.

“You see somebody suspicious following you. Go ahead and start recording them. If it gets hairy, it your 9-1-1 and then it goes in,” Miles said.
Share this article: