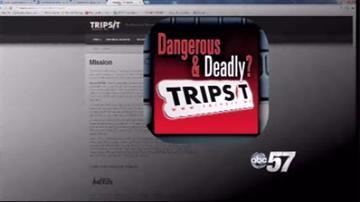 SOUTH BEND, Ind. -- There is a new social media site and it is getting a lot of criticism. Like Facebook and Twitter, it connects people and starts a conversation, but some do not like the topic because it is a site that caters to drug users.

The site allows drug users to anonymously talk about bad trips and how they're mixing drugs to get the ultimate out of body experience.

The website claims it is breaking the taboo of talking about drug use, but experts say it is just plain dangerous.

Everyday millions of people turn to Twitter and Facebook to connect with others online, but 'Tripsit' allows drug users to connect.

"I came from the sixties, I know a little bit about this. There is no such thing as a safe trip. It's a roll of the dice, Russian roulette every single time," said addiction counselor Dr. Joseph Baunoch.

Dr. Baunoch has been working with drug addicts for over three decades and immediately he saw one major flaw in the site's philosophy.

He says the social network goes beyond educational websites by suggesting drugs can be used safely.

"It's very scary. I think it is incomprehensible for anybody to start putting information out there under the guise that it is safe," said Dr. Baunoch. "Nothing is safe with illicit drugs."

However, the website claims it is saving lives by offering advice, resources, forums and a place for people to go when they want to talk about drug use, safe dosages and the effects of using while still remaining anonymous.

'Tripsit' has live chat rooms and online counselors available 24/7 and already many are turning to them for help when a drug experiment goes wrong.

But Dr. Baunoch says there is one problem with that. He says the website is only allowing people who fear being caught or charged with a crime to work through a bad trip instead of getting professional help.

"If there is a 24 hour hotline that can help anyone through a difficult situation, go for it, but if somebody has a bad trip the last thing they need to do is get on a hotline," said Dr. Baunoch. "They need to go directly to the hospital."

The website does have a few rules, one being that no one is allow to talk about dealing drugs or where to go to get drugs.

ABC 57 reached out to the website's founders for a response to this criticism and are still waiting to hear back.