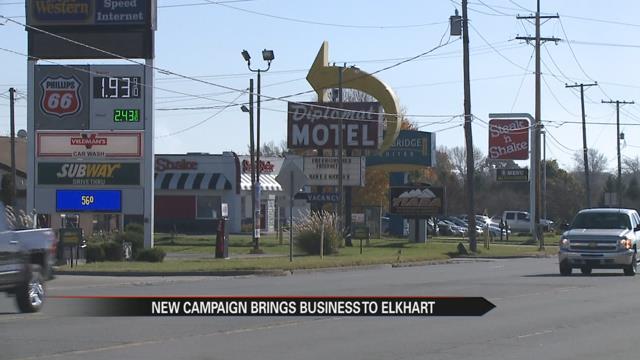 A new marketing campaign between the Elkhart Redevelopment Commission and the Elkhart County Convention and Visitors Bureau is impacting Elkhart’s economy.

The Exit 92 marketing campaign started in April and targeted the 65  million travelers on the Indiana Toll Road.

Focusing on the Elkhart lodging properties, they sold almost 3% more room nights than last year and they recorded a 5.65% gain in revenue.

Chirag Patel manager of a Super 8, right off Exit 92, admits this is a great step forward.

“The revenue has increased this year than previous years. I think the campaign is helping the local economy, said Patel.

Patel has been the manager for more than 9 years. He says he travels enough to see the Exit 92 marketing campaign in action.

“From far east going all the way west this is the liveliest exits,” said Patel.

According to the Elkhart County Convention and Visitors Bureau, or ECCVB for short, more travelers are staying at city lodging properties, local restaurants and stores.

The Executive Director of the ECCVB Diana Lawson says, “We are very pleased by the results of the first year of this campaign. The increase in visitors have helped local businesses collect at least $1 million more in revenue…”

Patel tells ABC57,  in the past year most of the property on this exit has been renovated, which helped revenue even more.

“We have seen an increase after doing that renovation as well.”

Patel says he’s been around long enough to see Elkhart’s  economy go up and down. He thinks they have good days ahead of them and mentioned local event’s, like the annual RV show and rugby tournaments, have also played a part.