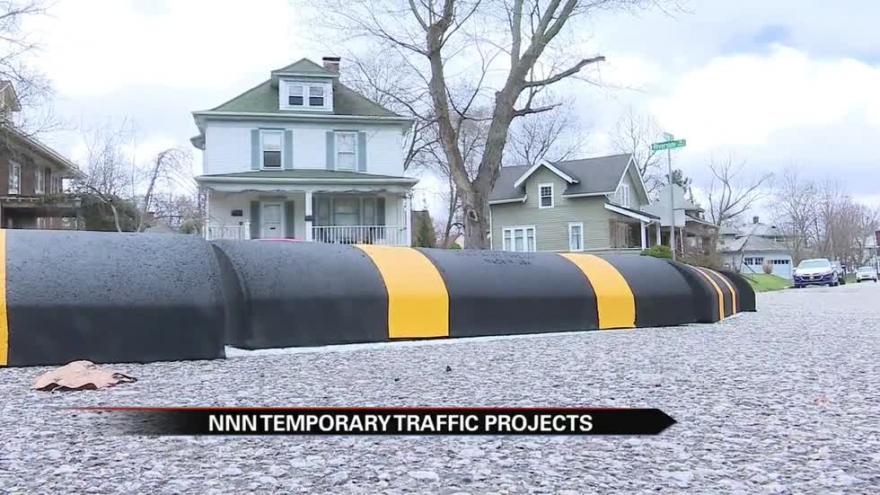 “It’s busy, you can see cars go by," said Barbara Deverah. "There they go.”

But homeowners like Deverah said cars on this street fly by.

The city thinks so too, so it's trying to slow down speeding cars with a study.
“A lot of folks speed, pretty constantly on these streets," said Jitlin Kain the South Bend Deputy Director of Public Works. "They’re demonstration projects for about 30 to 90 days to test the impact of these measures on traffic speeds."

"We asked residents to pinpoint streets where they often see speeding," said Kain.

The traffic measures used could reduce traffic speeds anywhere from two to more than 10 miles per hour.

"We wanted to try things that had not been done before in South Bend," said Kain. "Each measure has a different impact in terms of speed and each measure is appropriate in certain locations."

One man's house is up the street from one of the traffic circles.

"The intersection is a little tricky because you can’t see the cars, so you kind of have to scoot your car a little bit far out there, said the man. "So it’s a little dangerous. I’m kind of glad they put that traffic circle in there."

But since this is just a study, these road blocks could disappear.

However neighbors are positive the data will map out a more permanent solution.

"There are a lot of families with young children," said Deverah. "In fact in the house across the street, there’s a, I think he’s 3, child that lives there. And we just live in fear that the small child is going to be hit by a car. "So anything they can do to slow down traffic makes us very happy”

It's being paid for through a grant the city received. Shortly after the trial period is up, the city will decide whether or not to make this permenant. Permenant structures could appear in the fall, but likely will be more widespread next year according to the city. The city did not have an idea on the cost of permenant structures.