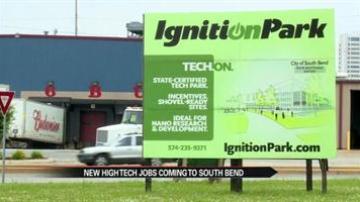 NOTRE DAME, Ind. -- Notre Dame and the city of South Bend are teaming up with a few other companies to create a multimillion dollar turbomachinery research facility to be built at Ignition Park.

The research and test facility will focus on advancing technology in gas turbine engines used in commercial and military aircraft, power plants and the oil and gas industry.

"We are very excited to see this growth in the Ignition Park, and we believe greatness attracts greatness," said South Bend Common Council president Oliver Davis.

Ignition Park is actually just a huge lot across from the South Bend Police Department.

Soon it will be home to a new turbomachinery research facility.

"I think as a research center with GE has really demonstrated that they will be a new anchor tenant for this kind of research and support in our community," said South Bend Deputy Mayor Mark Neal.

The economic impact is estimated at $15 million a year!

"This is a marriage of South Bend's strength and legacy in manufacturing marrying that with the intellectual property that's being created by our universities to really create a world class facility. This is really going to be one of the best of its kind- state of the art around the world," said Scott Ford, Director of Community Investment, City of South Bend.

How much is this going to cost?

"The initial investment from the city is 7.5 million, with the understanding that as we go through the documentation and the protocols, that there will be reimbursements both by Notre Dame and GE and so the city's ultimate investment through the Redevelopment Commission will be $2.1 million," said Neal.