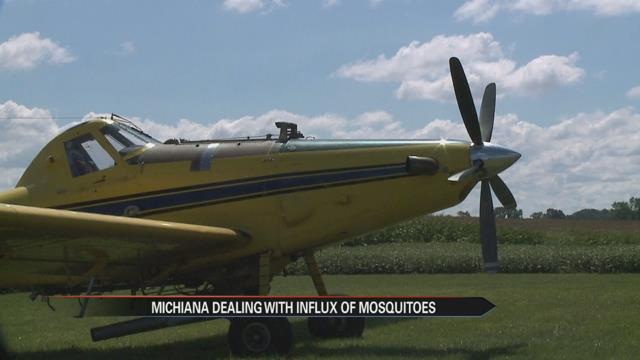 The FAA hasn’t granted permission for Agriflite- a company hired to use its aerial spray technology to get rid of mosquitoes- to actually spray these insects. Towns that were hoping to see something done Friday evening are going to have to wait until Tuesday of next week.

Due to heavy rains late this summer --- Michiana is dealing with an influx of mosquitoes.Towns and cities in St. Joseph and Elkhart counties are looking for relief.

The town of Wakarusa is looking to use planes to spray chemicals to get rid of them, but it’s a delicate process.

He says he's a little concerned on how the chemical might affect his bees.

“It depends on the chemical that’s used. A lot of the chemicals nowadays will kill the bee directly,"  Witmer says. "And that’s almost better because they don’t drag it back into the hive.”

David Eby, the president of Agriflite says there’s nothing to  worry about. Whenever he gets the call he works to ensure people know in advance and any spraying planned generally only happens after 7 pm.

“What we do here is spray in the evenings because we’re primarily going after nuisance type mosquitoes,” he says.

Agriflite, once it's cleared to spray, will only spray one ounce per acre. Eby says he has a message for all beekeepers, who like Witmer, might have concerns.

“There’s a website called Driftwatch to go on and register your bee sites," say Eby. "We check that before we go out and spray and if there’s any bees involved in the area or inside the area that we are going to spray we will contact you so you can cover them up.”

Neighbors say they actually enjoy the sight of the planes close to the ground. They say no one has had an negative side affects or has gotten ill because of the spray.

"If you don’t like it you can just go inside and wait til it all settles and it wont hurt you at all," says Dolores Lechlitner, a woman who lives less than five minutes away from Agriflite. "We’ve been outside when they’ve sprayed it and it’s been fine.”