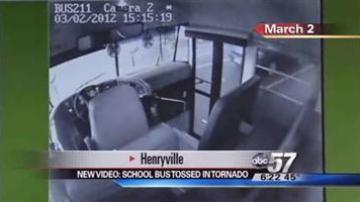 HENRYVILLE, Ind. -- New video was released from inside a school bus during the Henryville tornado.

The footage is of a school bus just minutes after it had nearly a dozen kids inside.

Debris was flying and lighting was flashing as the bus moved across the parking lot and slammed into a car.

The bus driver had to race to save the students, and herself, as the tornado raced closer.

Angel Perry, the bus driver said,"And I stopped the bus for a second, put my hands down and I said, 'Dear Lord, what do I do?"

After they made it back safely, the bus was launched into a nearby diner.