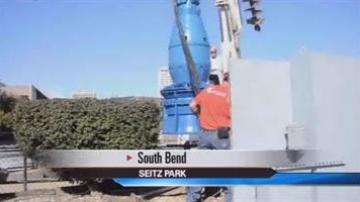 SOUTH BEND, Ind. – The city of South Bend installed a hydroelectric turbine on Wednesday. It’s expected to save the city about $40,000 a year in energy costs.

The city has owned the turbine since 1983 according to South Bend Municipal Energy Director Jonathan Burke. It was purchased as part of the original plan when the Fish Ladder was built.

He said it was put in storage, but once the Energy Office was established in September of 2010 it’s been a goal to use it. Now after the turbine was refurbished it was ready to put to use.

"It takes the energy that’s in the water and river and it basically turns it into kilowatt hours the real electricity you would use in your home," said Burke.

The power the turbine generates will be used in the Howard Park Facilities, the Human Rights Building, and even the ice rink.

Burke said this is "just a part of the story" for the possibilities of water power in the future.

"South Bend maintains the right that was given by the Federal Energy Regulatory Commission to develope a large scale hydro facility right here," he said.

If that facility was built it could one day grow to save the city a million dollars in energy costs a year.

Burke said that is still two or three years away from happening. There is still need for funding and planning.

The small turbine which was installed Wednesday still needs to go through some test, but they hope to have it up and running for a Ribbon Cutting Ceremony that’s scheduled for September 26th.