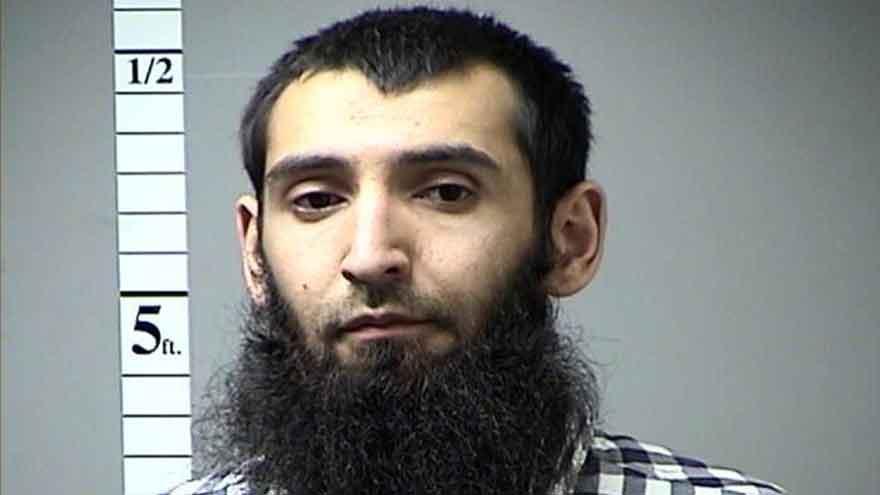 (CNN) -- The suspect in New York's deadliest terror attack since 9/11 has been charged with federal terrorism offenses in connection with Tuesday's attack in Manhattan in which eight people were killed, the acting US Attorney for the Southern District of New York said Wednesday.

Sayfullo Habibullaevic Saipov, a 29-year-old Uzbekistan native who was living in New Jersey, is charged with providing material support to ISIS and violence and destruction of motor vehicles, Joon H. Kim told reporters.

Read the federal complaint against the suspect

Saipov told investigators he was inspired by Islamic State videos, in particular one showing ISIS leader Abu Bakr al-Baghdadi, and began planning an attack a year ago, a federal criminal complaint states.

Saipov decided to conduct a truck attack "to inflict maximum damage against civilians" and that he specifically chose to strike on Halloween "because he believed there would be more civilians on the street for the holiday," the complaint says.

The suspect had planned the attack for two months and rented a truck nine days before the attack to practice, Kim said.

One of Saipov's cellphones reviewed by law enforcement contained approximately 90 videos, "many of which appear to be ... ISIS-related propaganda." The phone also had almost 4,000 images, many of which were ISIS propaganda, the FBI said in the complaint.

Authorities said Saipov came to the US legally in 2010. He allegedly drove a rented truck onto a well-trafficked bike path just blocks from the World Trade Center on Tuesday afternoon.

Eight people were killed and more than a dozen injured as the truck carved a path of destruction through several blocks of Lower Manhattan. Saipov crashed the truck into a school bus, left the vehicle brandishing imitation firearms and was shot by police, officials said.

In carrtying out the attack, Saipov relied on the playbook laid out by ISIS in recent years, officials said. John Miller, NYPD deputy commissioner for intelligence and counterterrorism, said at an earlier news conference that handwritten notes found near the scene had both symbols and words, but the general message was that the Islamic State would endure forever.

"He appears to have followed almost exactly to a 'T' the instructions that ISIS has put out in its social media channels before with instructions to their followers on how to carry out such an attack," Miller said.

The suspect arrived in the US as part of the diversity immigrant visa program, the Department of Homeland Security said.

The FBI is seeking information from the public about Mukhammadzoir Kadirov, 32, in connection with the attack. Kadirov has been located. The agency did not provide further details about the Uzbek national.

Saipov came to the US from the central Asian nation of Uzbekistan in 2010 on a diversity immigrant visa, according to the Department of Homeland Security. The Diversity Immigrant Visa Program awards up to 50,000 individuals per year a visa for a green card, which bestows permanent residency and is a path to citizenship.

The visas are awarded randomly to those in select countries to promote immigration from places that don't otherwise send many immigrants to the US. The bill establishing the program was signed into law in 1990.

Saipov was "radicalized domestically" in the US, Gov. Andrew Cuomo said.

"The evidence shows -- and again, it's only several hours, and the investigation is ongoing -- but that after he came to the United States is when he started to become informed about ISIS and radical Islamic tactics," Cuomo said.

Saipov was not on any US government terror watch lists, according to two sources familiar with the investigation.

Just over six months ago, Saipov began driving for Uber in New Jersey, the company told CNN. He passed a background check. The company said it has not yet identified any complaints about his safety.

The company is cooperating with authorities in the investigation.

Saipov once listed his occupation as a truck driver, his marriage license shows.

He had multiple run-ins with law enforcement in several states, online records show. He had traffic citations issued in Maryland, Missouri and Pennsylvania and was arrested by the Missouri State Highway Patrol in October 2016 after failing to show up in court for a misdemeanor offense.

He paid a $200 bond, which he forfeited when he didn't show up in court for his next hearing in November. A guilty plea was entered on his behalf.

Saipov's wife has spoken with investigators, law enforcement officials said. Saipov, his wife and three children have a residence in Paterson, New Jersey.

Carlos Batista, one of Saipov's neighbors in Paterson, told CNN that Saipov had acted as a "peacemaker" about six months ago. Batista was riding a dirt bike at night, and Saipov's friends asked him to stop. The incident became testy until Saipov stepped in and "calmed everything down," Batista said.

Saipov has been linked to social media accounts that contain ISIS-related material, a law enforcement official said Wednesday morning. The official also said Saipov has been somewhat cooperative with FBI and New York police investigators who questioned him in the hospital overnight.

Among the eight people killed, five were from Argentina, two were Americans, and one was from Belgium, according to the New York Police Department.

They had traveled to New York from Rosario, a town nearly 200 miles northwest of Buenos Aires, to mark the 30th anniversary of their high school graduation. A sixth Argentine national who was also part of the group was injured during the attack.

Anne-Laure Decadt, a 31-year-old Belgian woman, was also among those killed, according to a statement from her husband, Alexander Naessens. Decadt, a mother of two young sons, was on a trip to New York with her two sisters and her mother, Naessens said.

Hours after the attack, President Trump tweeted that he's ordered the Department of Homeland Security "to step up our already Extreme Vetting Program", and he accused Sen. Chuck Schumer of not being tough enough on immigration.

Speaking to the media on Wednesday, Trump called the suspect an "animal" and said that he planned to start the process of terminating the diversity lottery program.

"The President's tweets were not helpful. I don't think they were factual. I think they tend to point fingers and politicize the situation," he said.

"You play into the hands of the terrorist to the extent that you disrupt, divide and frighten people in the society. The tone now should be the opposite -- on all levels."

New York City Mayor Bill de Blasio said "the last thing we should do is start casting aspersions on whole races of people or whole religions or whole nations. That only makes the situation worse."

De Blasio also warned against stereotyping all Muslims as extremists.

"Anyone who wants to come into this country should be very thoroughly vetted as an individual," he said. "But the minute you start generalizing it, especially to a whole religion, then unfortunately we're sending the exact negative message that a lot of our enemies want and the terrorist wants to affirm -- that this nation is somehow anti-Muslim. We've got to do the exact opposite."

The tactic of turning an ordinary vehicle into a lethal weapon is becoming increasingly common.

In 2014, an ISIS spokesman called for lone-wolf attacks using improvised weaponry. "If you are not able to find an IED or a bullet, then single out the disbelieving American, Frenchman or any of their allies. Smash his head with a rock or slaughter him with a knife or run him over with your car or throw him down from a high place or choke him or poison him."

Since 2014, there have been 15 vehicular attacks in the West by jihadist terrorists, killing 142 people, according to a count by New America, a nonpartisan research institution. Those figures include Tuesday's attack in Manhattan.

CORRECTION: This story has been updated to reflect the note claiming that the attack was made in the name of ISIS was found near the truck. It has also been updated to correctly quote Mayor Bill de Blasio on comments he made cautioning against casting blame on different groups of people.