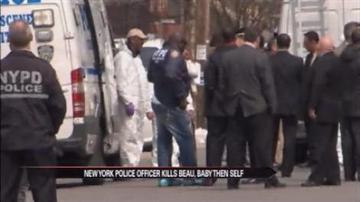 BROOKLYN, N.Y. -- Police say a New York City Police Officer shot and killed her boyfriend, her young baby and then herself.

The woman's older son, a teen from a previous marriage, jumped out a back window when he heard gunshots and called 911.

The 43-year-old officer was found dead with her 1-year-old in her arms.