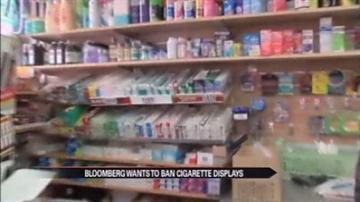 NEW YORK CITY -- New York City Mayor Michael Bloomberg is back with a new health-related law. This time he is going after cigarette displays in stores.

Bloomberg says the displays need to be kept out of sight, even behind a curtain.

He hopes this will help keep young people from picking up the habit.

"The tobacco companies, as we know, target children. Go to neighborhoods where at the bottom end of the economic ladder, they believe that those people are more susceptible to ads and less able to make distinctions," said Mayor Bloomberg.

The mayor banned smoking 10 years ago in restaurants and bars.

He has recently tried to ban large sugary drinks but it was overturned by the courts.