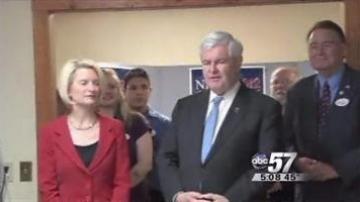 Wisconsin is the next hurdle in the race for the republican presidential nomination.

Voters go the polls Tuesday in the GOP primary. The latest poll numbers show Mitt Romney leading the pack in Wisconsin and Rick Santorum is right behind him.

Meanwhile a loss in Wisconsin could mean the end for Newt Gingrich and for the very first time Gingrich is admitting that Romney could be the nominee.

"I think that he clearly has a chance to do it and if he does succeed in doing it obviously Callista and I will support him and I’m sure Rick Santorum will support him,” said Gingrich.

Santorum said he's not giving up just yet. He's counting on a victory in his home state of Pennsylvania, later this month to keep his campaign alive.