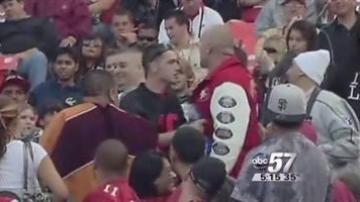 The NFL is cracking down on wild fans.

If you're ejected from a game you won't be allowed back in until you pass a so-called code of conduct exam.

In a New York Post article it states the exam is the brainchild of a California psychotherapist. The number of fights and angry exchanges at pro football games has been on the rise in recent years.

The tests are an effort to stem the tide of violent behavior.