NFL player stands up for beliefs 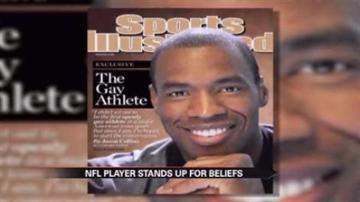 Earlier this week Jason Collins became the first active pro athlete to say he is gay.

Now another pro-athlete is feeling the fall-out from it.

Former Green Bay Packers safety Leroy Butler showed his support for Collins and his decision to go public on Twitter.

Now a Wisconsin church has pulled its invite for Butler to speak with kids there.

Butler says he does not care.

"You can`t just let people just--just `cause you don`t agree with their beliefs--just let them push you around. I can`t do that, because I think there`s other people out there dealing with kids who are going through this, and we have to put a stop to some of this," said Butler.

The pastor of the church said Butler could appear if he apologized and asked for forgiveness.