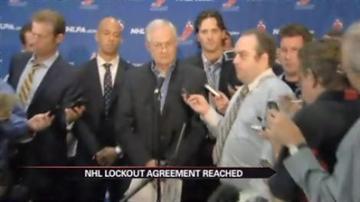 It took nearly four months and one long night to get the game back on the ice, but hockey is finally back.

With the season on the line,  the NHL and the Players' Association agreed on a tentative deal.

It would end a 113-day lockout and save what was left of the schedule.

Then NHL Commissioner and Union Executives announced the deal after a 16-hour negotiating session.

Now the agreement must be approved by the league's owners.